Monica Liu received her Ph.D. in sociology from the University of California - San Diego and she is currently Assistant Professor of Justice and Society Studies at the University of St. Thomas in Minnesota. Her work examines global internet dating and cross-border marriages between women from China and men from Western countries. Currently, she is finishing her book titled “Email-Order Brides under China's Global Rise.” Her work has been published in Signs: Journal of Women in Culture and Society, Men and Masculinities, and Qualitative Sociology.

My work explores the life histories and decision-making processes of Chinese women who seek marriages with Western men. The majority of the women in my study is middle-aged (above 40), divorced, and come from a variety of socio-economic backgrounds. I explore how emerging inequalities brought on by China’s transition from state socialism toward a global market economy shaped their shared desires to seek out-migration via marriage. My work is set against the backdrop of China’s economic ascendance on the world stage alongside a relative decline of the West. I compare how Chinese women from diverse class backgrounds envision a relatively homogenous group of men: Western men in agriculture, manufacturing, and small business sectors who feel they have been left behind by globalization. Through analyzing modest-earning Western men’s declining ability to marry middle and upper-middle class Chinese women, my work sheds light on China’s changing relationship with the global north. I show that a new global hierarchy of masculinity based on economic distinction has emerged, and this new hierarchy challenges Western men’s privilege in China previously associated with their racial, ethnic, and geopolitical status. 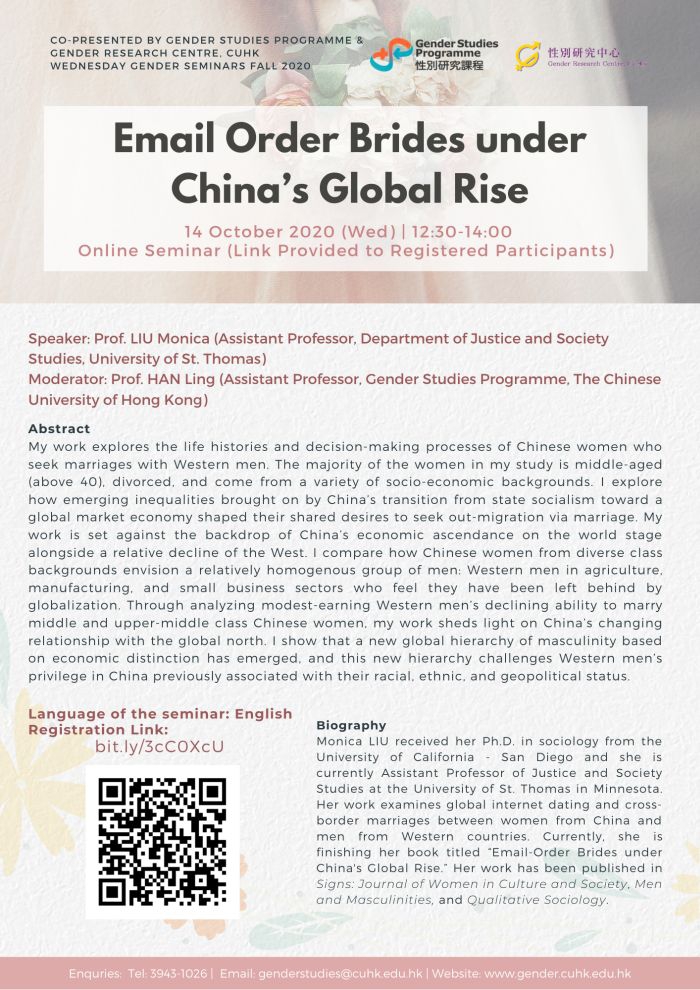