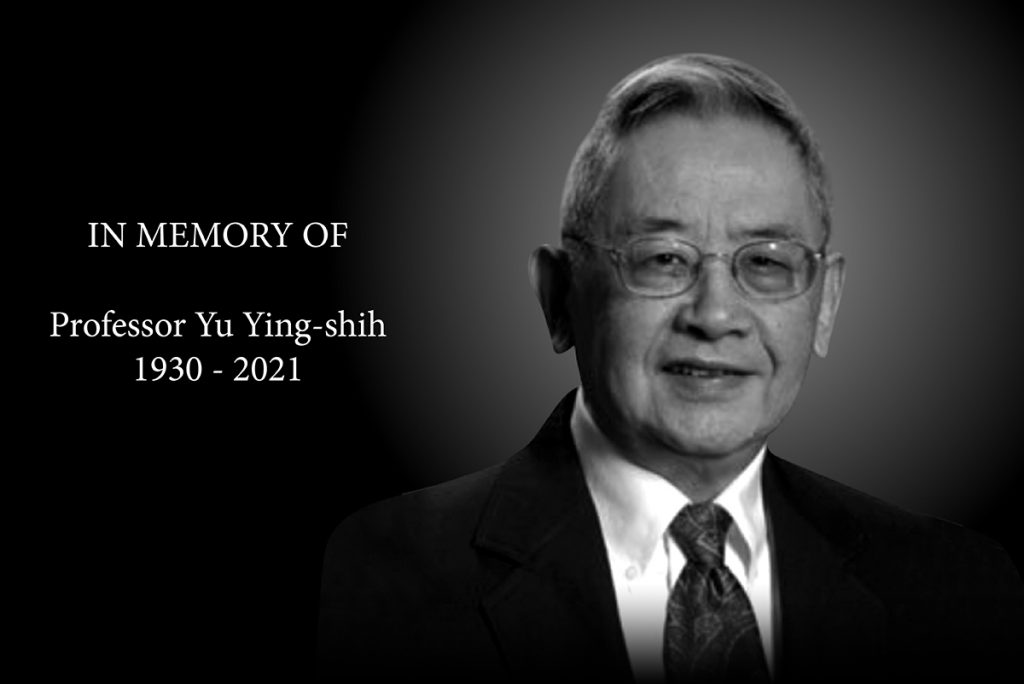 Professor Yu Ying-shih, the great intellectual historian, Academician of the Academia Sinica, former Pro-Vice-Chancellor and Doctor of Laws, honoris causa of The Chinese University of Hong Kong (CUHK), passed away on 1 August in the United States at the age of 91. CUHK is deeply saddened by the passing of Professor Yu and extends sincere condolences to his family.

Professor Alan K.L. Chan, Acting Vice-Chancellor of CUHK expressed his great sorrow at the loss of Professor Yu Ying-shih, and said, “Professor Yu Ying-shih devoted his life to academic excellence.  He was widely recognised as one of the most prominent historians of his generation and had made lasting contributions to the study of Chinese history and culture. With a deep connection to CUHK, Professor Yu was an alumnus of New Asia College. He later returned to CUHK to head New Asia College and served as Pro-Vice-Chancellor of the University. On behalf of all the members of the University, I extend our deepest condolences to Professor Yu’s family and my sincere respect for his dedication to scholarship and his contribution to the University.”

Professor Yu’s family originated in Qianshan, Anhui province, and he was born in Tianjin in 1930. He was admitted to New Asia College in 1950 under the tutelage of Dr Ch’ien Mu, and in 1952 became a member of New Asia College’s first graduating class. After graduation, he went to the US to continue his studies, and became a follower of Professor Yang Lien-sheng. He received a doctoral degree from Harvard University in 1962 and seven years later was employed by the same university as a professor of Chinese History. In 1973, Professor Yu returned to CUHK to head New Asia College, and also served as Pro-Vice-Chancellor of the University. He resumed teaching at Harvard University two years later.

As Pro-Vice-Chancellor of CUHK between 1973 and 1975, Professor Yu was instrumental in starting numerous projects in the broad fields of Chinese studies. He himself provided the living link between various academic disciplines. As Chairman of the 1974 Working Party on Educational Policy and University Structure, he helped formulate a number of recommendations which were subsequently taken by the Fulton Commission of 1976 as major points of reference. In recognition of his outstanding academic achievements and his invaluable contribution to the development of the University, Professor Yu was awarded the degree of Doctor of Laws, honoris causa from CUHK in 1977.

Professor Yu’s erudition defied description and disciplinary boundaries. Although he specialised in Chinese history, he also published extensively on Chinese philosophy, literature and art, as well as the history of the Chinese intelligentsia, aside from being the author of the widely acclaimed Trade and Expansion in Han China. In commendation of Professor Yu’s contribution to the field of History, his alma mater, New Asia College, along with Chung Chi College, jointly established the “Yu Ying-shih Lecture in History” in 2007, which invites a distinguished historian each year to deliver lectures and seminars on an interesting topic in History.

Professor Yu was Gordon Wu ’58 Professor of Chinese Studies, Emeritus, and Professor of East Asian Studies and History, Emeritus at Princeton University, Associate Professor at the University of Michigan, Charles Seymour Professor of History at Yale University. Professor Yu won a number of academic honors, including being elected an Academician of the Academia Sinica, Taiwan (1974) and Member of American Philosophical Society (2004), and was awarded the National Cultural Award, Taiwan (1991) and the Tang Prize in Sinology (2014). In 2006, Professor Yu was also named the recipient of the John W. Kluge Prize for lifetime achievement in the study of humanity, making him the first ethnic Chinese to be thus honoured.