The Beginnings of Dutch Trade in Asia and Shipments of Chinese Porcelain, 1595-ca.1622

Christine was coordinator and research assistant in the department of History of the Rijksmuseum in Amsterdam and in 1982 edited the publication of The Ceramic Load of the Witte Leeuw (sank in 1613). From 1985 to the present she has been giving presentations and written articles on the history of the VOC, Kraak-panelled porcelain, Chinese ceramics for the Dutch market, and the Ethical Side of Shipwreck Salvages. Numerous field trips include kiln sites in South China – Dehua, Dongxi and Pinghe and Jingdezhen; archaeological sites at Kharakorum (Mongolia), Tainan (Formosa), the southeast coast of Africa, and Iran. She was invited to numerous international conferences, and has presented papers at Jingdezhen, Nanchang, Shanghai, Dongxi, Beijing, Hong Kong, Singapore, Taipei, Jakarta, Manila, South Africa, London, and in Holland. Christine obtained her Ph.D. Degree in Humanities at Leiden University in September 2021. She is currently updating and digitalizing the publication of The Ceramic Load of the Witte Leeuw, and setting up a database on shipwreck ceramics.

This lecture will give a systematic interpretation of the maritime trade and transportation of Chinese ceramics in a historical perspective. The focus is on which types of porcelain were ordered and what the Dutch East India Company (VOC) transported during the first half of the 17th century.

In this presentation, it will be shown that during the years 1595-1602, individual private companies travelled to Asia from Holland in search of pepper and spices and returned with only minor quantities of porcelain. Chinese porcelain also arrived in the Dutch Republic as booty of captured Portuguese ships, the São Tiago and Santa Catarina.

From 1602 (establishment of the COC Company) until 1622, even though Chinese porcelain was continually in demand, relatively few orders were sent to Asia. The amounts of porcelain items on the return ships were variable, with only a few peaks – in 1614 an amount of 85,540 items and in 1622 several shipping lists show quantities from 36,000 to 90,000 pieces.

Dutch orders for porcelain was decisive in keeping the porcelain production in China active. The VOC was the main company ordering and storing Chinese porcelain and distributed it within Asia and to Europe during the first half of the 17th century. This gave the Company an exceptional place in the history of Chinese export ware.

* Speakers will deliver the lectures through online platforms. We encourage you to pay a visit to the exhibition at the Art Museum in the morning and join us in the Activities Room in the afternoon to learn from the sharing of scholars worldwide with us. (Participants who join at the museum will have priority in the Q&A session) 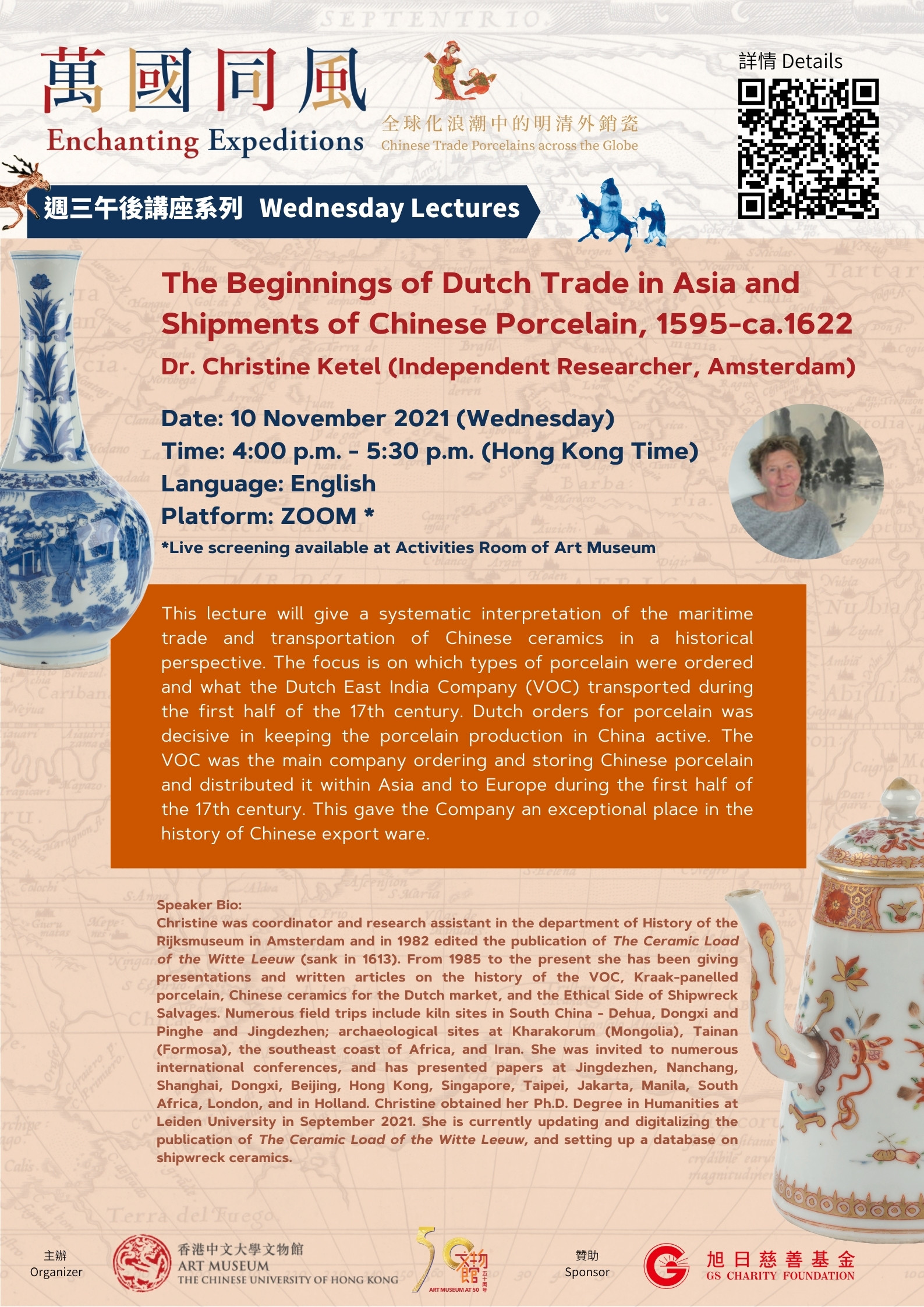