The talk will be conducted with ZOOM. Link will be provided later.

Prof. WU Ka Ming is Associate Professor, and Director of the Master Program in Intercultural Studies, in the Department of Cultural and Religious Studies at the Chinese University of Hong Kong. She was a visiting fellow, and now a life member, of Clare Hall, Cambridge University. Trained as a cultural anthropologist, she has taken up extensive ethnographic research to examine the cultural politics of state and society, waste, and most recently, gender and nationalism in contemporary China. Her academic papers have been published in high impact journals including Journal of Asian Studies, Modern China, Hau: Journal of Ethnographic Studies, The China Journal, Cities, Urban Geography, Ethnology, and China Perspectives.

Her recent teaching joins the field of environmental humanities, with course titles of “Living in the Anthropocene: Nature, Culture and Power” and “Introduction to Environmental Humanities: Debates in China.” Her research graduate seminar “Thing Theory” examines cutting-edge theories of new materialism, science and technology, objects and non-human to encourage students to conduct inter-disciplinary research beyond conventional humanities. Her book Feiping Shenghuo: Lajichang De Jingji, Shequn Yu Kongjian (CUHK 2016) (Living with Waste: Economies, Communities and Spaces of Waste Collectors in China) has a great impact on the public discussion of waste and has been covered by major media, such as the Guardian and Mingpao Hong Kong. Thinking waste a lot, she is starting a new research project on the ecological consequence of takeout phenomenon in China.

Mr. CHONG Chan Yau is the Co-founder and Chief Executive Officer of CarbonCare InnoLab and a member of the Board of Directors of CarbonCare Asia Limited. Mr. Chong is a graduate from the University of Hong Kong in 1981. He obtained a Master’s degree in Information Systems from the London School of Economics and Political Science in 1985. He served in the Hong Kong Government as an Administrative Officer. He also served as an Executive Director of Oxfam Hong Kong and a member of the Board of Director.

Mr. Jorch WONG is the founder of The Loops Hong Kong, a local one-stop recycling start-up that offers door-to-door recycling service to residential and commercial users. Jorch obtained a Bachelor’s degree in Journalism and Mass Communication at Hong Kong Shue Yan University in 2019 and continued his career in the advertising industry after his graduation. As the recycling rate in Hong Kong has reached historical low in the past decade, Jorch found the need to make a change to the city. In 2020 spring, at the age of 24, he established The Loops with the dedication to increase local recycling rate by acting as a missing link between recycling plants and citizens, and promoting a self-sustained closed-loop recycling system in Hong Kong. Jorch is also keen to change public stereotypes to traditional recycling with his background in media and advertisement training. The Loops has now gained a solid base of users and recently launched partnership with global brand, such as Procter & Gamble and Watsons HK, together accelerating the change and bettering our city.

Hong Kong’s waste problem is getting more serious in recent years. According to the Environmental Protection Department, each Hong Konger disposes an average of 3.37 pounds of municipal solid waste to landfills every single day in 2018. When it comes to plastic, the problem is getting worse. Greeners Action estimated that over 46 million single-use plastics are disposed in Hong Kong every week.

Prof. Wu will talk about the various policy experiments, corporate strategies and activist campaigns for responsible consumption in different parts of the world and discuss what Hong Kong can learn from these emerging new initiatives. Mr. Chong, the co-founder and CEO of CarbonCare InnoLab, an NGO dedicated to nurturing and expanding the active communities to mitigate climate change and develop sustainable low-carbon lifestyle, will share with us the work of his organization and highlight the role of young people in Hong Kong in transitioning to a zero-carbon economy. Mr. Wong, the founder of The Loops Hong Kong, a local one-stop recycling start-up that offers door-to-door recycling service to residential and commercial users, will share with us the perspective of the recycling industry, and the dilemma of going eco-friendly versus real-life situation. He will also advise the audiences on the responsibilities of global citizens in promoting sustainability. 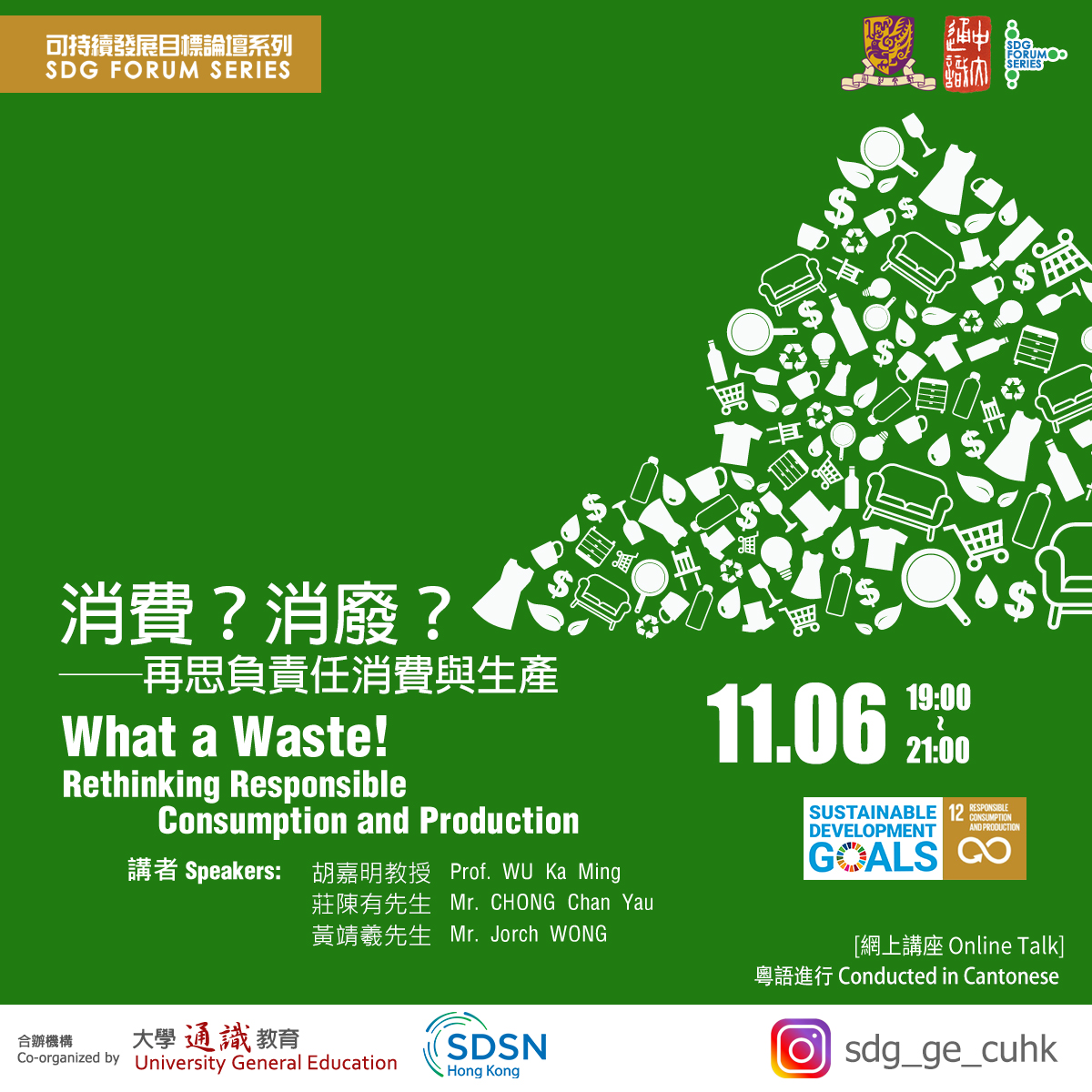