Jingdezhen to the World: Chinese Export Porcelain from the Late Ming Dynasty

Dr. Teresa Canepa is an independent researcher and lecturer in Chinese and Japanese export art, a member of the Council of the Oriental Ceramic Society (OCS), London, and co-editor of the OCS Newsletter since 2017. She completed a PhD in Art History at Leiden University, The Netherlands, and is author of Silk, Porcelain and Lacquer: China and Japan and their trade with Western Europe and the New World, 1500-1644 (Paul Holberton Publishing, London, 2016); Jingdezhen to the World: The Lurie Collection of Chinese Export Porcelain from the Late Ming Dynasty (Ad Ilissvm, London, 2019); and co-author of Leaping the Dragon Gate, The Sir Michael Butler Collection of Seventeenth-Century Chinese Porcelain (Ad Ilissvm, London, 2021). She has published a number of articles and lectured widely on these subjects.

This lecture presents a brief discussion of the main types of porcelain produced at several private kilns in Jingdezhen from the Wanli reign (1573–1620) to the Chongzhen reign (1628–1644), including a new style intended almost exclusively for export known as kraak, the so-called Transitional, and ko-sometsuke porcelain made for the Japanese market. Relevant information is brought to light through archaeological finds from kiln sites located in and around Jingdezhen, some yielding higher quality porcelains than others, and from Chinese junks that sank in the South China Sea. Multiple sources of evidence (textual, material and visual) shed light on the trading networks through which these Jingdezhen export porcelains circulated, as well as the way in which they were acquired, used an appreciated by the different societies in Europe, the New World and Asia. The only known kraak armorial plate bearing the impaled arms of García Hurtado de Mendoza, 4th Marquis of Cañete, and his wife, Teresa de Castro y de la Cueva, most probably ordered via Manila during the time Hurtado de Mendoza was Viceroy of Peru between 1589 and 1596, a kraak plate bearing a pseudo-armorial, and a few pieces decorated in Transitional style and one other recovered from the c. 1643 ‘Hatcher Junk’ made after European shapes attest to the influence that the European merchants exerted on the porcelain made specifically to order for them in Jingdezhen. These pieces reflect the complex and fascinating commercial, cultural and artistic interactions that occurred between the East and West in the early modern period.

* The speaker will deliver the lectures through Zoom. We encourage you to pay a visit to the exhibition at the Art Museum in the morning and join us in the Activities Room in the afternoon to learn from the sharing of scholars worldwide with the exhibition curator Dr. Wang Guanyu. 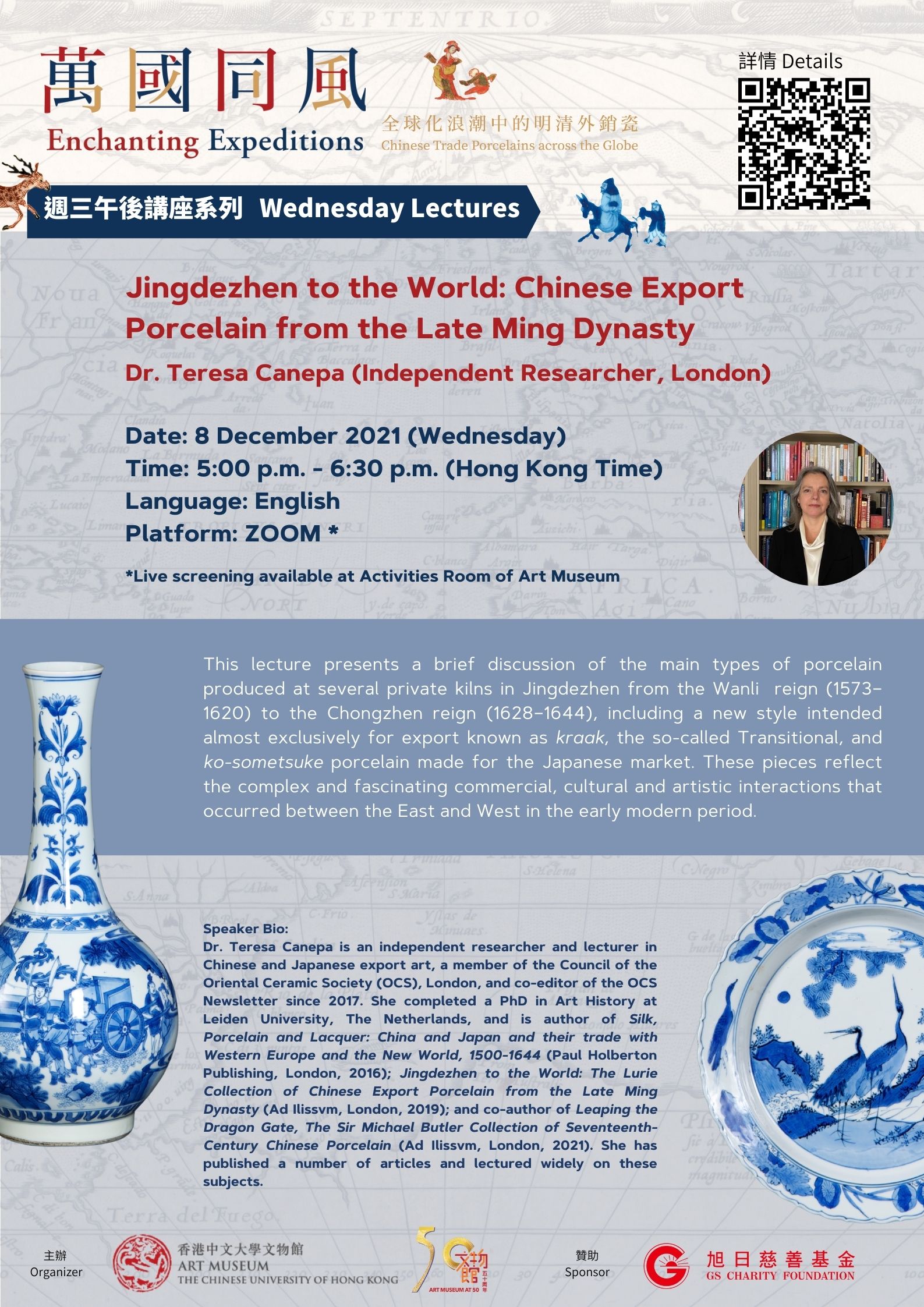