Professor B R Deepak, was trained in Chinese history and India-China relations at the Peking University and Chinese Academy of Social Sciences, Beijing, at Jawaharlal Nehru University, New Delhi and University of Edinburgh, UK. He has been the Nehru and Asia Fellow at the Chinese Academy of Social Sciences, Beijing. Prof. Deepak’s publications include India and China 1904-2004: A Century of Peace and Conflict (2005); India-China Relations in first half of the Twentieth Century (2001); India-China Relations: Future Perspectives (co ed. 2012); India-China Relations: Civilizational Perspective (2012) China: Agriculture, Countryside and Peasants (2010); Cheeni Kavita: Gayarvin Shatavdi se Chuahdvin Shatavdi Tak (Chinese Poetry: 1100 BC to 1400 AD) (2011), a translation of 88 selected classical poems for which he was awarded the 2011 “Special Book Prize of China”, the first Indian to receive the highest literary award from China. Prof. Deepak has been a visiting professor at the Chinese Academy of Social Sciences, Tianjin Foreign Studies University, China, Doon University, Dehradun India, and Teaching Fellow at the Scottish Centre of Chinese Studies in the University of Edinburgh, UK.

In the times of globalization and intertwining economic interests at regional and trans-regional levels, the cooperation and crises management has become increasingly important for a sustainable domestic as well as external economic development and environment. This talk aims at studying the cooperation and Crisis Management Mechanisms (CMMs) between India and China and their impact on the overall relations. The case study of 1991, 1996, 2005 and 2012 Confidence Building Measures (CBMs) would provide a base for the theoretical discussion. The findings have led to some assumptions through which we could explain the cooperation and CMMs in the context of India and China. It concludes that the cooperation and CMMs are determined by various variables such as internal and external factors; economic and political factors; asymmetrical force structure; and the power of global architecture etc. The findings have acknowledged the role played by CMMs in maintaining peace and tranquility along the border, avoiding conflict, and thus creating a congenial atmosphere for India-China cooperation not only at bilateral level but also at regional and multilateral organizations. 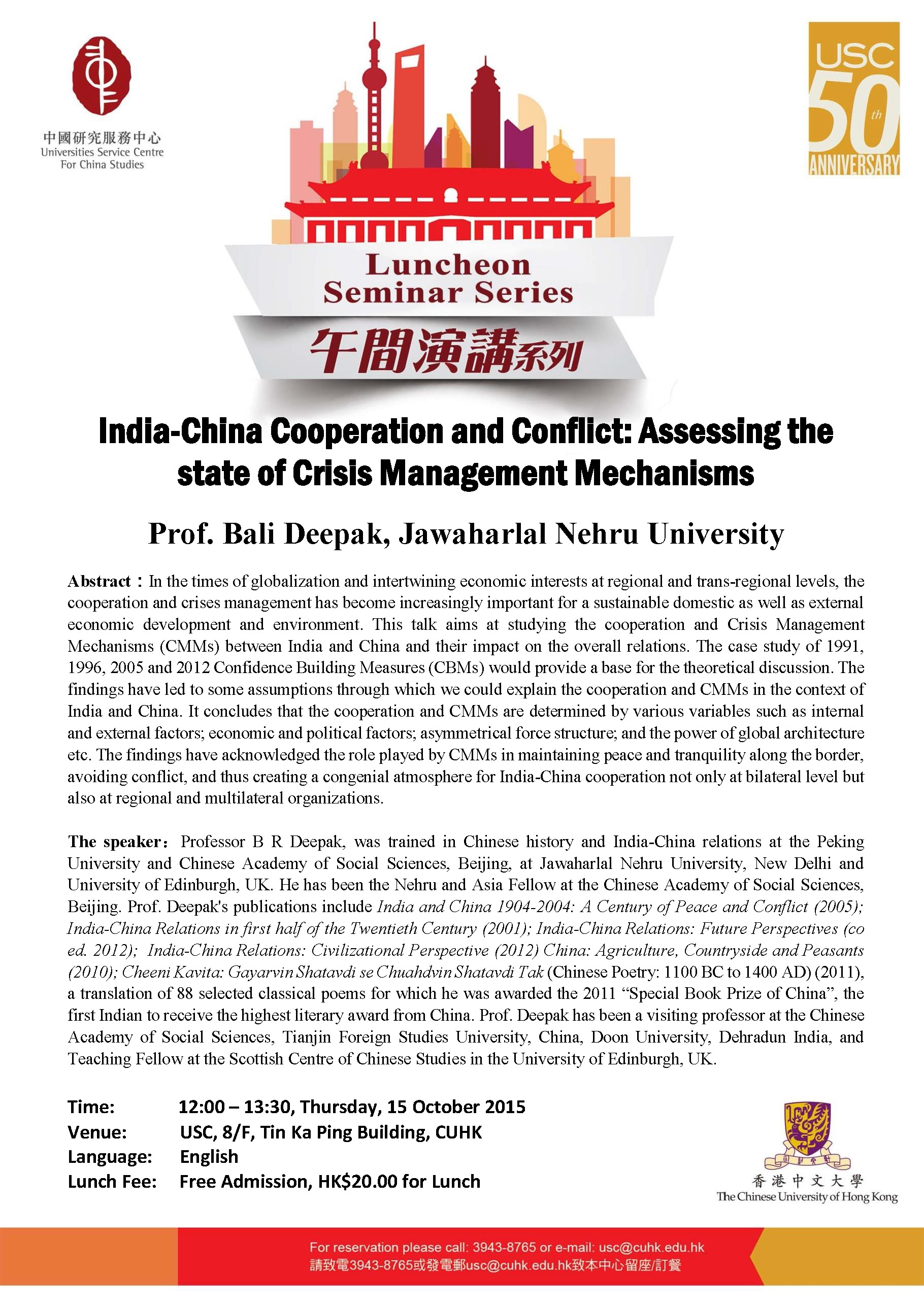